The current aim of this laboratory is to understand the molecular mechanisms of protein secretion and export across membranes in bacteria. The major approach is to combine genetic manipulation and biochemical studies in an in vitro protein translocation system developed earlier in this laboratory.

Schematic representations of the integral forms of SecA (As and Am), and how these two forms comprise the major portion of the secretory channel embedded within the cytoplasmic membrane of Echerichia coli. (A) SecA potentially forming two types of channels, with and without SecYEG. (B) Our working model for SecA as the principal protein conducting-channel. (C) TEM ring-structures of SecA by single particle analyses

Most protein export in Escherichia coli utilizes a signal-peptide dependent pathway that involves with the gene products of several sec genes as well as signal peptidases. Our project analyzes the translocation of periplasmic and outer membrane proteins. Several approaches are being used to analyze the functions of SecA and other Sec proteins in the process, in particular in relation to the ATP hydrolysis that is essential for the protein export. Genetic manipulation allows the overproduction of the Sec proteins, and purified proteins are used for reconstitution of the functional membrane vesicles and translocation system. Conversely, membranes deficient in Sec proteins are used to analyze the effects in translocation. Our recent work suggests that SecE/SecY are not obligatory for translocation of certain precursor proteins. Moreover, SecA has, in addition to being a major component of essential ATPase, also performs an important structural role in protein translocation. Current work focuses on examining the structure and function(s) of SecA as an integral protein -conducting channel, and determines the roles of SecYEG in the process. Electrophysiological studies, and election microscopic and atomic force microscopic studies are carried out to complement the biochemical studies.

An AFM image of SecA from Escherichia coli
showing the two different forms of SecA; SecAs (in solution) and
SecAm forming a channel, when embedded in a lipid bi-layer

Another project investigates the export of Colicin V, which does not contain a typical signal peptide and does not rely on the Sec-dependent system. Instead, the export of Colicin V, in addition to TolC, requires the products of two additional genes that constitute the pathway for extracellular export. One of these, cvaB, codes for a membrane protein possesses domains, including ATP binding sites, similar to the transporters for multi-drug resistance and cystic fibrosis chloride channel. Recent work has focused on the protease function and nucleotide specificity of the CvaB protein. 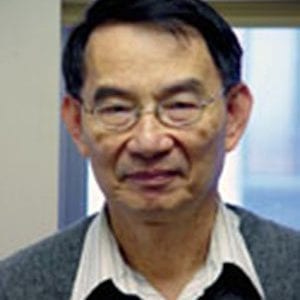