Dr. Connors studies the fundamental building blocks of nature by exploring the the nucleus under extreme conditions and pushing the limits of our understanding of Quantum Chromodynamics (QCD), the theory decribing the strong force. By colliding heavy nuclei at relativistic speeds, large high energy colliders can create a hot dense phase of matter known as the quark gluon plasma (QGP). Under normal conditions, quark and gluons only exist in bound states but at high enough temperatures and densities like those experienced immediately after the Big Bang, quarks and gluons can behave as free particles within a QGP phase. There are two facilities in the world capable of creating the QGP, the Large Hadron Collider (LHC) at CERN in Switzerland and the Relativistic Heavy Ion Collider (RHIC) at Brookhaven National Laboratory (BNL) on Long Island. Dr. Connors uses high energy quarks and gluons that are created in the early stages of these collisions to probe the QGP created. As the particles traverse the QGP they lose energy and eventually form a spray of particles that are collectively called a jet. Dr. Connors has measured QGP effects on jets with data from the PHENIX experiment at RHIC and the ALICE experiment at the LHC. In addition to analyzing PHENIX data, her research group is working on building a novel hadronic calorimeter which will measure the energy of jets at RHIC as part of the sPHENIX experiment which is scheduled to begin collecting data in 2023.

For a review of jet measurements written by Connors et al follow this link:
https://journals.aps.org/rmp/abstract/10.1103/RevModPhys.90.025005 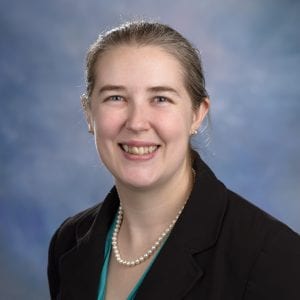