LTC Harris is an accomplished Soldier and leader. He started his storied military career commissioning as a Second Lieutenant in the Armor Corps thru the Southern Illinois University Edwardsville, Army ROTC.

Upon graduation he completed the Armor Officer Basic Course (AOBC), and continued on to Ft. Hood Texas, C Company, 3-66 Armor Battalion where he served as a Tank Platoon Leader. In April 2002, LTC Harris was transferred to A Company, 1-66 Armor Battalion, where he was promoted to First Lieutenant. One year later, he deployed to Iraq in support of Operations Iraqi Freedom (OIF) to conduct post war and stability and support operations. After completion of his deployment and initial term of service, LTC Harris temporarily transition to the Civilian sector. In April 2005, after joining C Company, 2-334th, 100th DIV as Company Commander, LTC Harris completed the Pre-Command Course. After command, LTC Harris was selected for the Active Guard/Reserve (AGR) program where he served as the United States Army Reserve (USAR) Operations Officer for Atlanta Recruiting Battalion. During this time, he was promoted to Captain.

Upon completing his initial AGR tour in recruiting, LTC Harris transitioned to Ft. Jackson, SC to attend the Adjutant Generals Captains Career Course (AGCCC) and after graduation was assigned to the 443d Civil Affairs Battalion. There he served as the Civil Affairs Chief for the Battalion and completed the Civil Affairs Qualification Course (CAQC). LTC Harris volunteered to support the 411th Civil Affairs Battalion mission to deploy to Afghanistan in support of Operation Enduring Freedom (OEF), where he served as the Headquarters and Headquarters Company (HHC) Commander assigned to the International Security Assistance Forces of Regional Command South. Upon redeployment, LTC Harris returned to the 443d Civil Affairs Battalion and was selected by the Army Reserve Careers Division to pioneer Civil Affairs and Psychological Operations Career Management. In 2012 he earned his Masters of Arts in Human Resource Management from Webster University and in 2013 was selected to Command for a third time. Prior to assuming Command, LTC Harris completed the Advanced Operations Course and received a Graduate Certificate in Stability, Security and Development in Complex Operations (SSDCO) from the Naval Post Graduate School in Monterey, CA. Upon completing a two-year command of the 308th Civil Affairs Brigade HHC, and the Command and General Staff Officer’s Course (CGSOC), LTC Harris was selected to serve as the Assistant Professor of Military Science and Executive Officer for the Gateway Detachment Army ROTC program at Washington University in St. Louis, MO. After a 2-year tour, LTC Harris served as the Chief of Operations (S-3) for the 360th Civil Affairs Brigade in Ft. Jackson, SC where after 14 months he was nominated to serve as the Professor of Military Science (PMS) for the mighty Panther Battalion here at Georgia State University.

LTC Harris is a loving husband and father, who brings his duality as a leader of Soldiers and Families, to build and develop the GSU Army ROTC Battalion. #PanthersLeadTheWay. 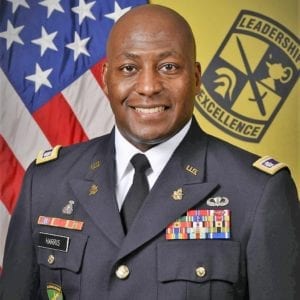