During her professional career, Dr. Kim has been able to contribute to three interdisciplinary fields of studies: Sociology, Religion, and Asian American Studies. By documenting and probing deeply enmeshed social, economic, political, gendered, racialized, and religious contexts of Asian America, her research has been both broadly focused and culturally competent at the same time. Exploring rich and under-tapped research areas of Asian American religions and culture, gendered and racialized experiences of women, and representations of race and gender in the age of mass media, her work emphasizes the interdisciplinary nature of sociology.

As a co-chair of a Consultation on Asian American Religion, Dr. Kim has created a venue within the American Academy of Religion (AAR) since 1993 for dialogue and for the presentation of research on Asian America as part of multiplicity of contexts that include migration, diaspora, race, American culture and religion and complex transnational realities. And more recently, she has been working with nine other selected scholars from around the nation on the Theology and Community Project funded by the Lilly Endowment, Inc. The aim of the project is to probe intricate relationship between people’s shared values and their experiences of communities (both intentional and unintentional and/or faith-based), and to reinvigorate various forms of “the beloved community.”

She is also actively involved in both local and trans-national community work. She is a member of the Board of Directors of Center for Pan Asian Community Services Inc., an Asian American delegate of the Ecumenical Association of Third World Theologians, and works with other human rights organizations.

Dr. Kim teaches courses on gender, sociology of religion, racial and ethnic relations, social theories, and introduction to sociology. In these classes, she attempts to implement both team/community-building and liberatory pedagogical processes. 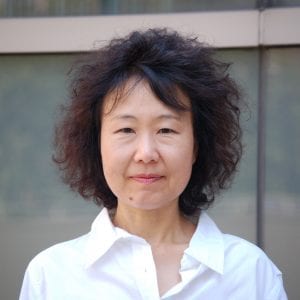