Edvige Jean-François is an award-winning, multilingual global journalist and the inaugural executive director of the Center for the Studies on Africa and Its Diaspora. The center focuses on elevating scholarship, narratives, cultural and business engagement about Africa and the African diaspora. It furthers aims to foster global understanding and equity.

During her more than 20 years as a journalist and television producer, including covering the White House. She has traveled extensively while documenting the stories of people in the United States and abroad. Much of her work has focused on exploring developments in Africa and the African diaspora, covering topics as wide-ranging as business and economics, geopolitics, natural disasters and crises, arts, culture, sciences, and technology.

Jean-François believes in the power of storytelling to change lives and connect the world. She began her journalism career at ABC News in New York and went on to join the CNN Washington bureau, later becoming a Senior Producer for CNN International, where she produced documentaries, multi-platform news, and features for several flagship programs. She created, oversaw, partnered on several international sponsorships in CNN’s Africa programming, including African Voices, Marketplace Africa, and Inside Africa.

She produced and contributed to news reports that aired on The Situation Room with Wolf Blitzer, Vital Signs with Dr. Sanjay Gupta, CNN Heroes, among other brands. She also covered developments at the U.S. Congress, the State Department, and the Supreme Court.

Her media background includes interviews with C-suite executives, high-level government officials, and celebrities. She has traveled extensively leading productions in North and South America, Africa, Asia, and the Middle East. Her field logistics experience extends to covering health outbreaks and natural disasters in crisis zones, such as during the Mexico earthquake in 2017, hurricane Matthew in 2016, and the catastrophic Haiti earthquake in 2010.

Jean-François also worked for Associated Press Television News as a White House producer. As a writer and producer, she has garnered multiple, awards, nominations, and commendations for her work, including eight regional and national Emmy Awards nominations, several Telly Awards, and a NAMIC Vision Award. She was also a contributor to CNN’s 2010 CINE Golden Eagle Award for coverage of the Haiti Earthquake and the network’s Peabody Award for coverage of the 2008 Presidential Primary Campaigns and Debates that led to the historic election of President Barack Obama. In 2022, in partnership with her undergraduate alma mater, Hamilton College, she won a Council of Advancement and Support of Education (CASE) Circle of Excellence gold award for a magazine she guest edited on racial injustice and inequality.

Jean-François is also a public speaker and moderator who served as a specialist in journalism and conducted lectures organized under the auspices of the U.S. State Department and the Inter American Press Association.

She holds a Master of Science in Journalism and postgraduate fellowship from the Columbia University Graduate School of Journalism. She also holds a Bachelor of Arts in English from Hamilton College. In 2022, she delivered the Baccalaureate address during Hamilton’s rescheduled 2020 graduation ceremonies, as a result of the pandemic. She also received an honorary Doctor of Humane Letters. Jean-François’ international interests and pursuits began in college, when she studied language, literature, and art history at the Instituto Internacional in Madrid, Spain. 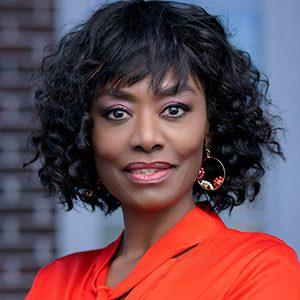